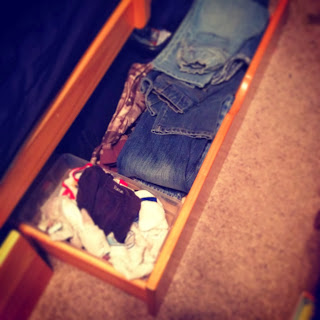 Pants for my six-year-old to be precise.

We have two boys and two girls.

We have one income.

My husband and I just returned from Tanzania a few weeks ago and every bit of extra money we could leave there, we left.

We got back and apparently, we ran out of pants for the boys. Both boys have grown, it went from shorts weather to pants weather in the last two weeks, additional holes have been ripped in the knees of most of our jeans, or the pants gremlin came while we were gone.

Because of the aforementioned trip, I did not make a big deal of it. There were a couple of pairs that I found and were using. When you know that kids on the other side of the world have only one set of clothes, this is not a crisis.

Until it kinda became one.

On Saturday night, our three eldest children performed in one of two performances of the children's musicals on the weekend.

Once again, the pants issue was...well, an issue. The pair that I had fished out of the dryer after looking everywhere unsuccessfully for the required "blue jeans" needed for my six-year-old to wear, had a big hole in the knee. I didn't think that was particularly "performance appropriate." So, I went hunting for another pair and threw them in my son's direction while I was helping the other kids get ready and my husband drove off to get them there early for rehearsal.

When I arrived for the performance, I was told that my son had his pants rolled twice on the waist to keep them from falling down -- resulting in some grade-A level high waters on the ankles. That made me a bit sad. For about two second, because right then when I heard about the ankle flood issue, a friend with three boys came walking over and said,

"Hey...I finally remembered to bring those bags of clothes for your boys. They are out in the car. Do you want them so you can change out Declan's jeans?"

I think I stood there with my eyes blinking for second or two and then yelled out an "Absolutely!" (And added a mental fist-pump).

Talk about "in the nick of time" -- which is great because one of her sons is actually named Nick.

And just like that, within two minutes, I was changing my boy out of his baggy-waisted jeans and into some new-to-him dark-rinse, super awesome jeans.

We love hand-me-downs in our family. While new clothes are always nice, I do love the packing up of giving our gently (mostly) used clothing to friends and family. I love seeing the clothes my littles wore on other little people. And, I confess to loving getting those bags as well from friends and family too.

Those bags say, "I have something to give and I thought of you."

I just finished putting our "new" pants away in Declan's drawer. And now, his brother gets all the size 5's and 4's we have all to himself.

And what's even better, is that I just stumbled upon the bag left by another sweet friend last week and guess what that one has?


"You can be sure that God will take care of everything you need, his generosity exceeding even yours in the glory that pours from Jesus. Our God and Father abounds in glory that just pours out into eternity. Yes."