Showing posts from May, 2012
Show all

Leaning on the Everlasting Arms 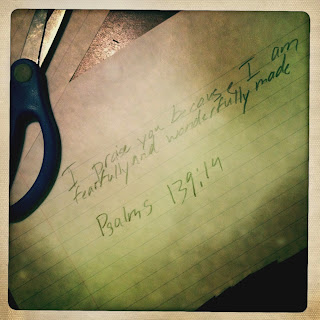 Once again God has blown through our house and left an almost tangible sweet aroma of His presence. It happens like it most often does -- the glorious embedded in the mundane. It was just another night. The day was long and this mom of four was dragging -- despite the forty-five minute cat nap my husband had gifted to me while he made dinner. Sure...the morning spent at Bible Study was permeated with God's presence and a fresh revelation of His love for us. It was a bittersweet time of repenting for behavior and attitudes that are not Godly, but also experiencing the overwhelming and surpassing Love only a heavenly Father could lavish upon his humanity-scarred daughter. But the aftermath was spent with quotidian activities: a grocery run, van refueling, playground escapade, bickering siblings and struggle during a pushed back home school session left me feeling like I lost the battle today. And even though I am valiantly attempting not to give into to fear and worry o
Read more
More posts