A few minutes ago, my eyes stuttered open. The grey light through the curtains brought a silent cheer as I assumed that this would be the first night that I could count as interrupted sleep.

A short walk to the bathroom belied that fact as the bright light from the lit hallway filtered through the bathroom windows -- unexpected power in a country actively engaged in power rationing. Rubbing sleep away from my eyes, I considered taking a shower while I have the guarantee of hot water.

The night before on Monday, I fell asleep mid-sentence at 7:30 p.m. after a busy day at Ngarenaro public school and a tour of an orphanage out the direction of Mt. Kilimanjaro. After washing away the red mud that clung to my shoes and feet, I lay down sated with having held a little four-year-old boy in my lap for a quarter of an hour. That small blessed head felt the same nestled into my shoulder an ocean away from home and my own little four-year-old boy.

So I suppose it was only natural that sleep would consume me and wake me in the middle of the night.  I have been dancing a tango with Sleep and I'm not keeping up. My strategy of forgoing sleep on the 27 hour trip has not worked out as I had hoped. Perhaps taking two sleeping pills and crashing in a medicated-stupor until almost noon on Saturday did not help me acclimate to the time change of being 11 hours ahead of stateside time. The trip to the local larger grocery store, Shop Rite, was oddly disjointed through my addled mental fog. Even some shopping at local stores was not the appeal it would normally be. I felt so slow. My body longs for rest about 2 p.m. every day here -- which would be 3 a.m. at home.

Saturday night was rife with expectation for the visit to Calvary Temple the following day. I had visited this church in 2008, when I came with my extended family on my father's side for the 50th anniversary celebration of both the church and the local bible school that my grandparent's had helped to found.

There is a metal plaque on the cornerstone of this church that was placed there when it was built that dedicated it in the name of Mae West Bruton, my great-grandmother (and almost namesake save for my mom's intervention...thanks Mom!). It says, "Her works do follow her."

It's hard to describe the feeling of placing your hand on something that you've only seen in photos and to sit in wooden pews that cradled your father as a young boy.


As we were ushered into "seats of honor" to the right of the platform (which consisted of stuffed chairs and couches and bottled water), I couldn't help but tear up as the choir sang and moved and grooved unlike anything you can describe.


And there was the bookshelf woodworker we had met the day before, playing the keyboard like a maestro.

And over his head, my eyes fell upon the Swahili translation of a Bible verse found in Deuteronomy 1 -- which blew my mind because at home, we had literally just finished an entire morning study on that chapter.

"You have dwelt long enough at this mountain; turn and take your journey and go." - Deut 1:6a-7a

It strikes me immediately as I compare both the English and Swahili versions that the word "safari" actually means "journey."

This word has been cropping up everywhere for me lately. I've always liked it but since receiving an early birthday gift in September of a necklace that espoused, "the joy is in the journey," it seems that the constant wearing of it against my skin has made the word come alive in my soul.

I purchased a handmade travel journal from a friend the Saturday before I left and guess what it said. 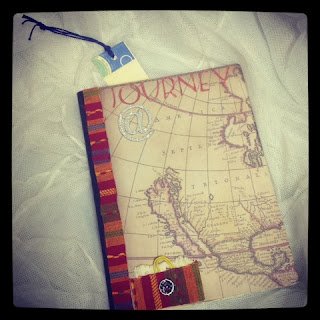 From airline headrests to posters promoting the countries Tanzanite trade. 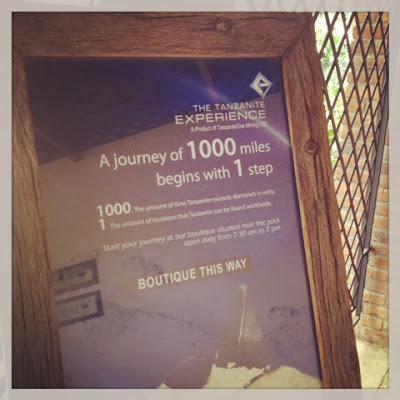 The moment of terror that sliced through my body and sent adrenalin pumping in response when the pastor of Calvary invited me up to "say a few words" turned to a blessed calm as I looked out at the packed church building.

This journey was meant to be for a time such as this.

How could I not weep tears of gratitude as I tried to express how much this hallowed ground meant to me and my family and my very soul. How the labor started by my grandparents had blossomed into such a lush garden of grace. How the children singing upstairs about how God loves them so pierced my heart as they greeted me warmly and called me, "Mama Declan" after my first-born son. 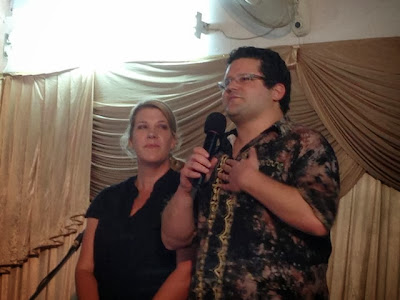 They have an audacious plan for a newer and bigger facility that reaches higher and further into their surroundings. My blessings for that building to be complete was met with hearty ah-mens.

The rest of that day was a blur of another sermon (we had first arrived for the second service in English and stayed through the third Swahili service) and then being led upstairs to the bishop's office where his grandson, Presley, (also a scrumptious four-year-old who played Bad Piggies on his pastor father's iPad during the service -- reminding us of our own Camden at home) grabbed Rylie's hand to lead the way. 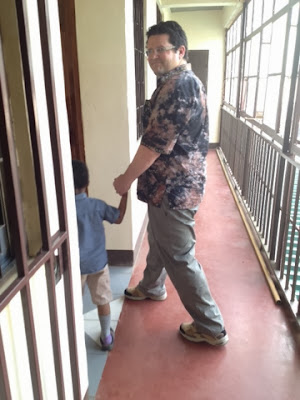 Lunch was served. Seconds were persistently encouraged. Talk was made.

But I was only partially present. I was still reveling in the goodness of God to allow me to see what can happen when someone is willing to give their life in the service of others.

The work may be hard. You may have to leave loved ones behind. You may stumble and fall and worry and cry.

But it is never in vain.