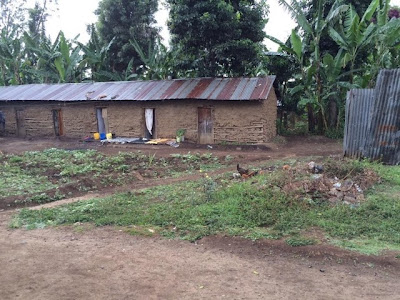 So, back to Thursday -- a thanksgiving spent halfway around the world, not with turkey, mashed potatoes and fixings, but as an authentic of a day devoted to being thankful as I have ever experienced to date.


In my last post, I left off with me on the side of the road struggling with the overwhelming emotion that consumed me from what I had seen over the past few days.

They fixed the flat tire. The sun broke through the clouds. An airplane took flight at the airport across the road. I dried my tears. We got back in the car and headed back to Arusha.

It felt like it had already been a full day, but it was only lunch time.

After a quick lunch, we headed back to Maranatha Primary School to pick up Neema and another teacher to take them to a bookstore that they use for the government-approved (and required) curriculum for the school. We weren't sure what to expect, but it wasn't really this. 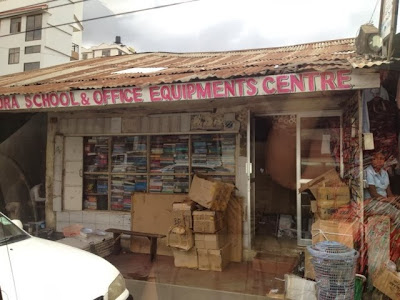 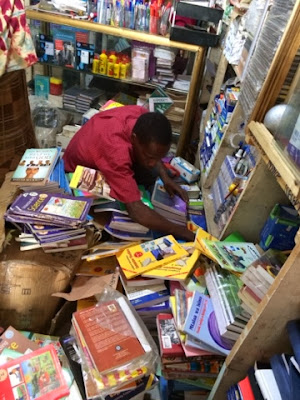 The teachers from Maranatha showed us the "wish list" that we had asked them to create. We asked the owner to total it up and he said he would give us his best wholesale price. They had listed out 1 teacher handbook and about 15 student workbooks in about 4 subjects. Those 15 books would be shared between 2-3 students (one student having one consumable workbook is a luxury here).

Even with that accomodation, the total came to more than we had to spend. The teachers assured us that they would be happy with anything we could do so Rylie and I walked outside and looked at the list. In the end, we were able to purchase about $250 in books and the teachers were ecstatic. We also happened to run into Javelin, a teacher for Bethel Primary, whom we had seen earlier that morning and whom Rylie has a connection to as a young teacher. He was buying a handful of books for his classroom and students from his own pocket. Rylie asked if we could purchase the books and he graciously accepted.

The store employees started pulling books out and stacking them on the counter and both teachers meticulously went through the list and the stack and made sure they had everything accounted for. The stack was smaller than Rylie and I had hoped. 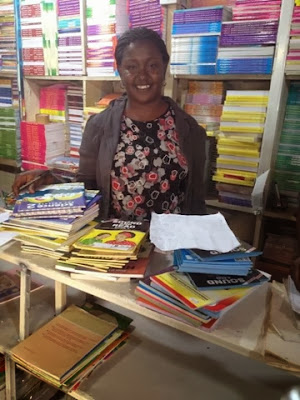 In that moment, we wished we were wealthy. That we had won the lottery. That we hadn't spent our own money on a safari celebrating our anniversary/40th birthdays that we were leaving on the next day. In that moment, if we could have gotten that money back, we would have.

The teachers were so excited as they boxed up the books and tied it with a twine handle for carrying. They gave us the receipt, but we knew that they needed it, so I snapped a picture and had them keep the hard copy. 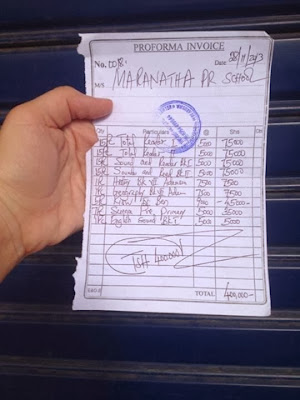 Rylie had one last purchase of something we had heard every time we asked a group of teachers what supplies and materials they needed the most.

Rylie and Joel had to laugh -- both of them being teachers and using a good amount of red ink.

So, on this day, Rylie got a box to give to the Maranatha teachers and staff. 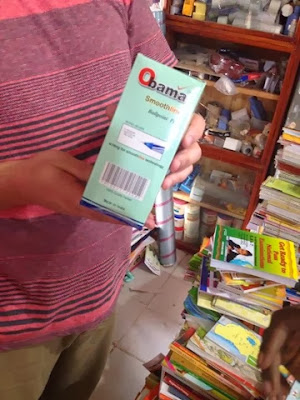 We had to giggle a bit at the name. Apparently it is a well-known and trusted brand. So that's good.

And then we were done.  We drove Neema and the other teacher back to Maranatha. Back by the dilapadated buildings and people with sad eyes. Back by the men selling and doing drugs. Back to the children who love giving me high-fives and playing my iPhone.

We said our goodbyes. I hugged Neema and she thanked us for being an answer to prayer. I thanked her for all that she is doing for the children in the neighborhood and for her amazing faith and love.

As we drove back "home," we were quiet. So much had happened. It was Thanksgiving. Earlier in the week and even that morning, we had talked about going to feast at a nice restaurant. But, none of us wanted to do that any longer.

What sounded good was a simple bowl of Hot and Sour Soup from the Chinese Dragon. What sounded even better was using the restaurant's wi-fi to Facetime our children back home. It felt great to tell them and my parents how thankful we were for what God had done that day and the other days, and how grateful we were for them and that they let us go so far away to give to others.

And too quickly, it was time to go back to the apartment and pack up for the safari we were leaving on the next day. But my heart and mind was still back at the rescue center and in that bookstore and on that forlorn playground. As I packed our suitcases and put aside things to give to Joel for his apartment, I found myself not thinking about the wildlife we would be seeing over the next two days, rather I thought about the things I wanted to do on Monday after we got back and before we catch our flight home.

Visit the Kase Bookshop we've heard so much about and check out their selection of story books.

Visit the "science store" that is supposed to be nearby to look for science kits and materials.

Type up and talk through our strategy for building Character 101 and possibly bringing out a group of teachers in July.

And this makes me happy. It means that when I leave on Monday night, I'm not really leaving for good. I will leave a piece of myself here. My thoughts and actions going forward will return to this place. The roots that have bound me here since before I was born have dug into the soil even deeper.

Last night, my sister and I were chatting via iMessage (have I mentioned how wonderful technology can be?) about how we feel about beautiful Tanzania. I told her how I was reluctant to leave. How the "crazy thought" of living here someday cannot leave my mind. As she concurred with that same desire, she asked me a question that I still don't have the answer to.

"How can you be homesick for a place you have never called home?"

All I know is that it is entirely and thoroughly possible. 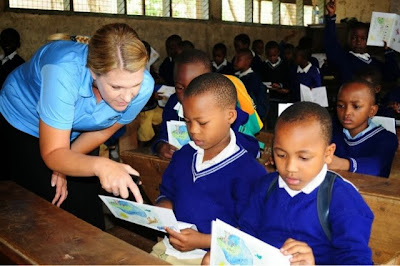