When It All Sounds Good in Theory....Part Deux 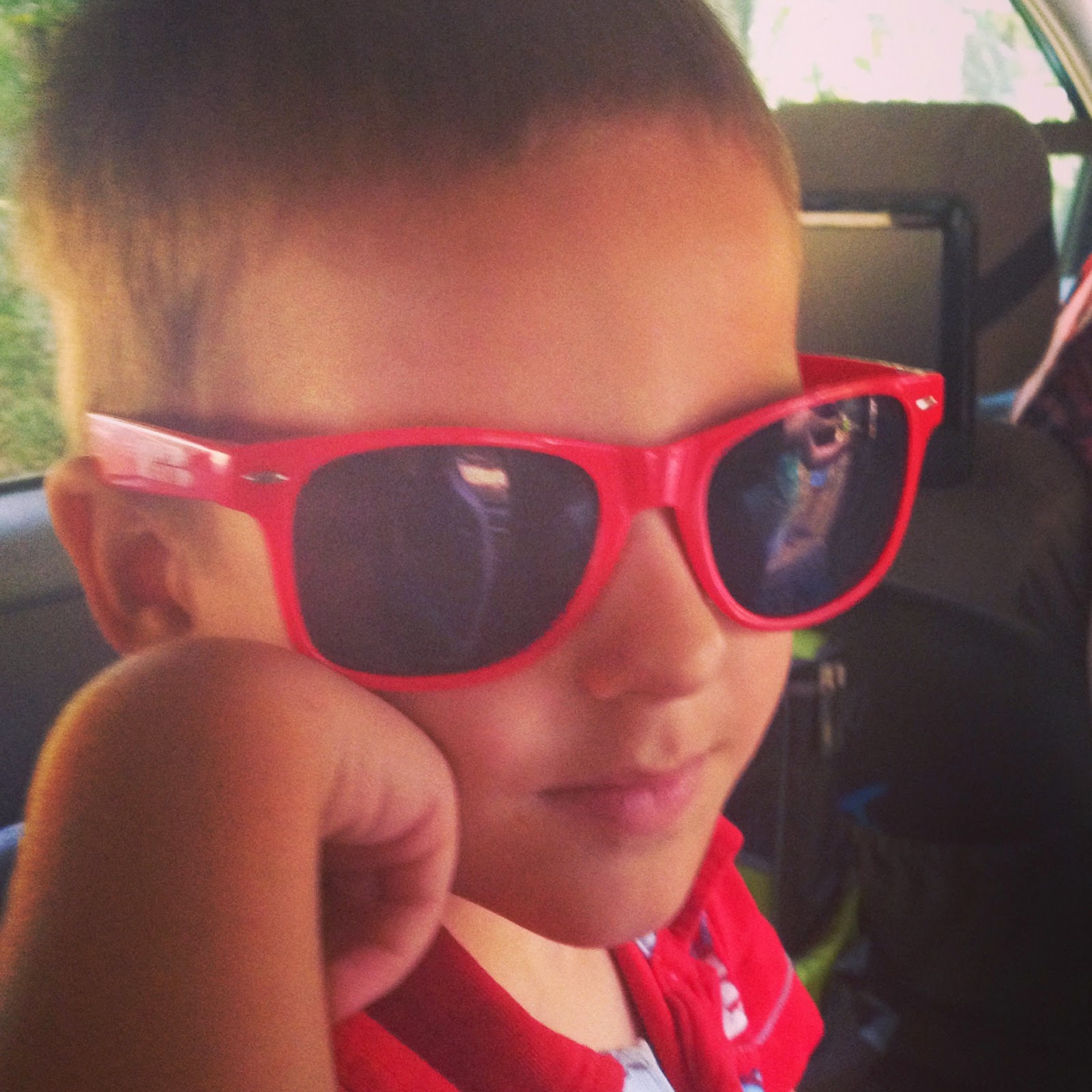 Last time I left off, we were on the road to Portland to see Rylie's brother and family. However, there was one little problem. Or a lot of them. Lice. Infestation 2014 up in their business. Given the choice to delay our trip up and avoid exposing ourselves to it, we opted to switch our visits around and instead drive the hour to Cave Junction and stay with Rylie's dad for a few days.

Which was a good call because by then, I was headed to Sickville fast. When we pulled out from Michelle's, I got in the very back seat with a pillow and a blanket and passed out. I woke up when we arrived at my father-in-law's place and pulled it together enough to help get the trailer set up (faster the second time around), and then go into town with everyone for Wild River's taco pizza goodness.

However, half a box of tissues later, I was ready for bed and when the morning of July 4th dawned the next day, I "independently" realized that I couldn't get out of bed. Literally.

I spent all of the day sweating and shivering on the bed in the tent trailer with a fever that wouldn't stop. That was not a fun day. Most of it is a blur beyond bathroom trips and gulps of water and life saving cranberry juice.

Unfortunately, my father-in-law was having water issues at his house. As in, there wasn't any. Fortunately, there was some after dinner and while everyone else drove off in search of a fireworks show, I got to lay my weary bones in some hot water and enjoyed what felt like the best hot bath ever.

Thankfully that day in bed did the trick and the next day, I felt well enough to drive up to the Oregon Caves with my family (plus, my back rebelled against any more laying down at that point). We had lunch and then took a tour through the cave. This was the first time that *all* of us have been able to go on the tour. In year's past, one of us has always waited outside with some toddler or infant. We had a great time and the kids even became junior rangers and got honorary badges. 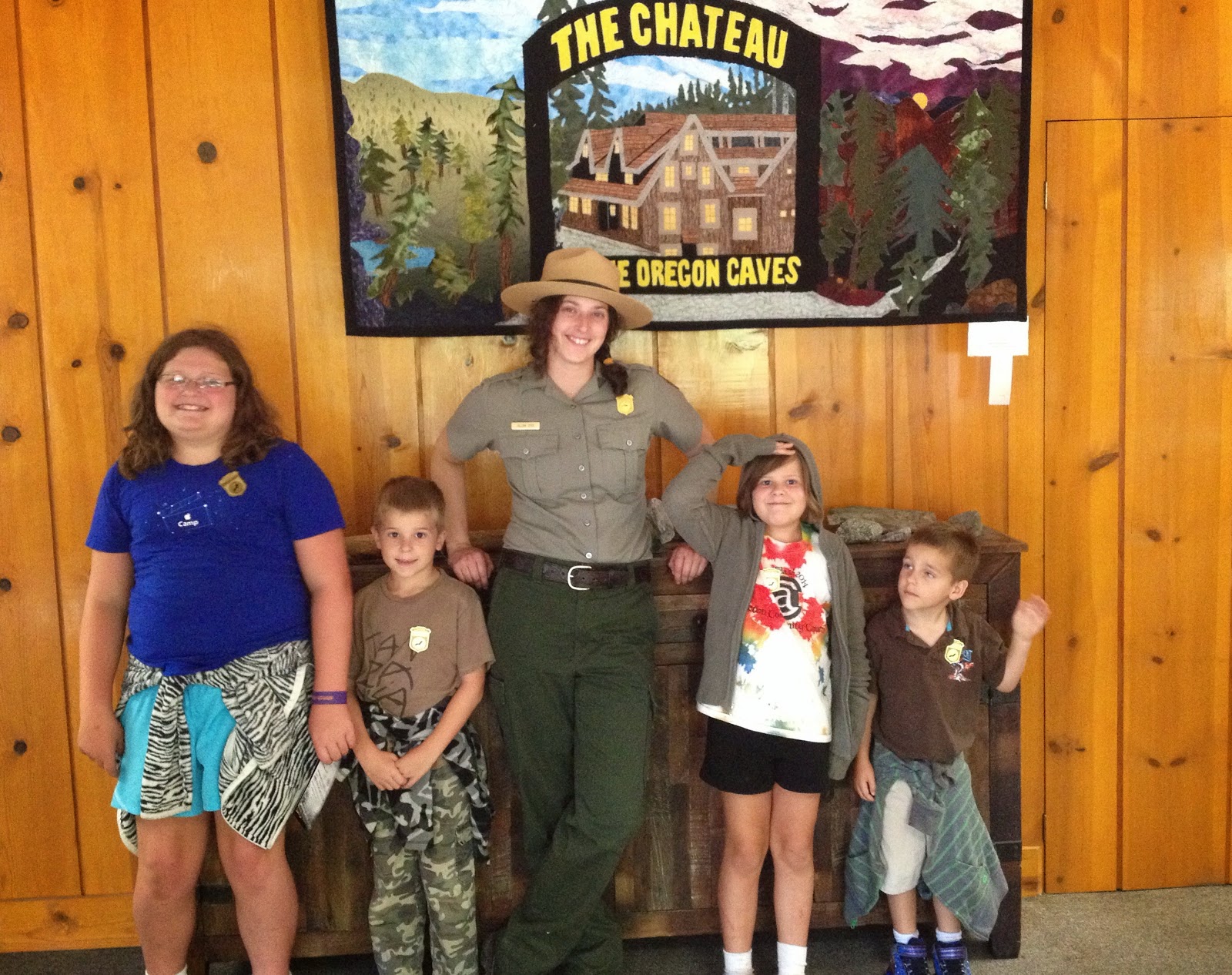 We had one more day at Grandpa Kurt's house and the kids enjoyed hearing him play guitar and drawing with him. It had been too long since we were able to make the trip up. 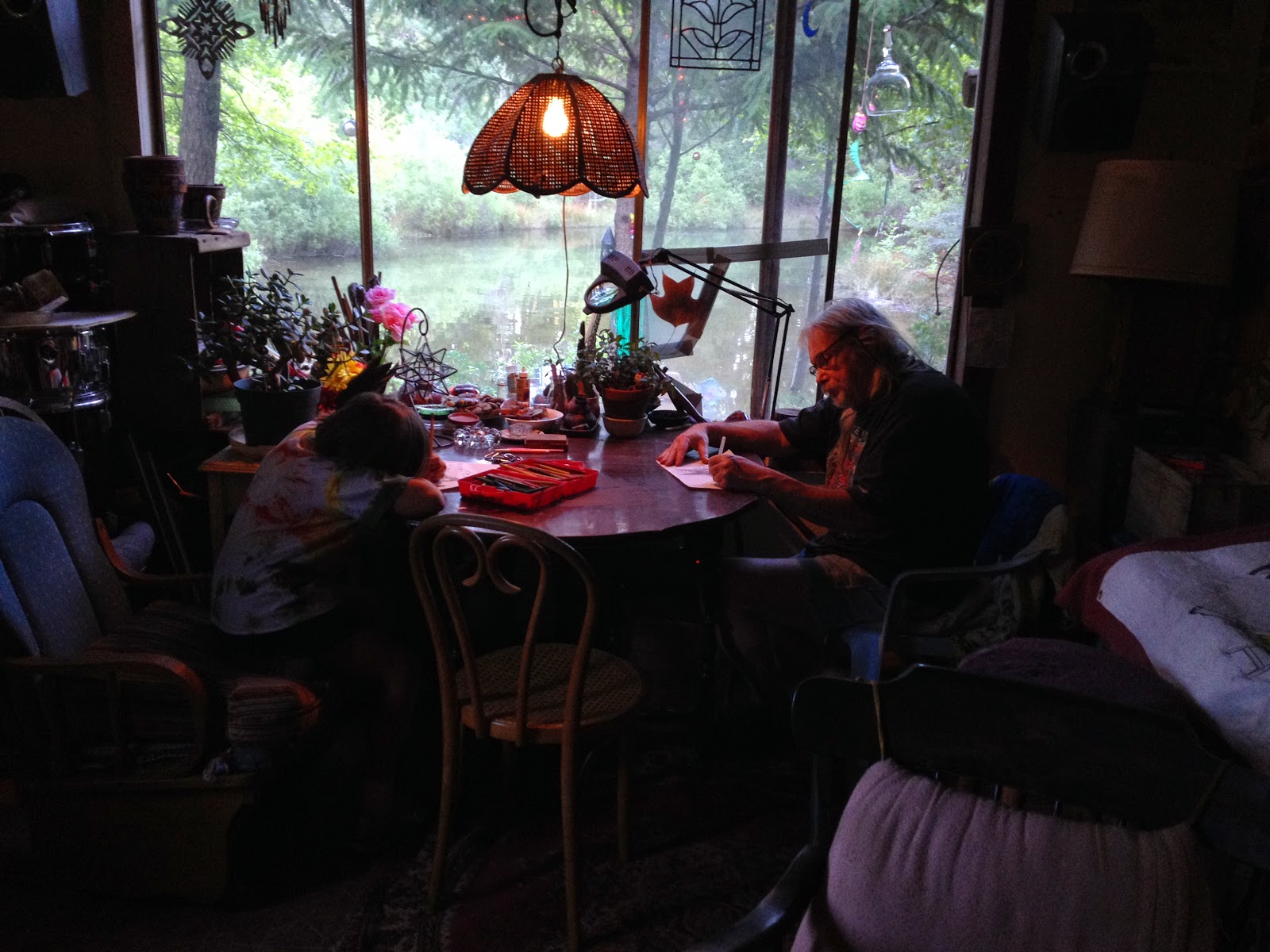 One of us had the bright idea to ask him to come along with us to Portland to see family. One of us is brilliant -- just sayin'. To our delight, he came with us.

Adding to that delight was an unexpected bonus of seeing friends from home who were also on the I-5 in their minivan coming south from Seattle as we were headed north to Portland. We pulled off the road at Carl's Jr. and hung out for a bit with the Tacchino family before heading on to our destinations.

And not too long after, we were in Portland. Because 5 hours in the car is nothing when you've spent 13 in one day. We were so excited to see our family and their new house. The cousins immediately started playing and exploring their "wildnerness backyard." 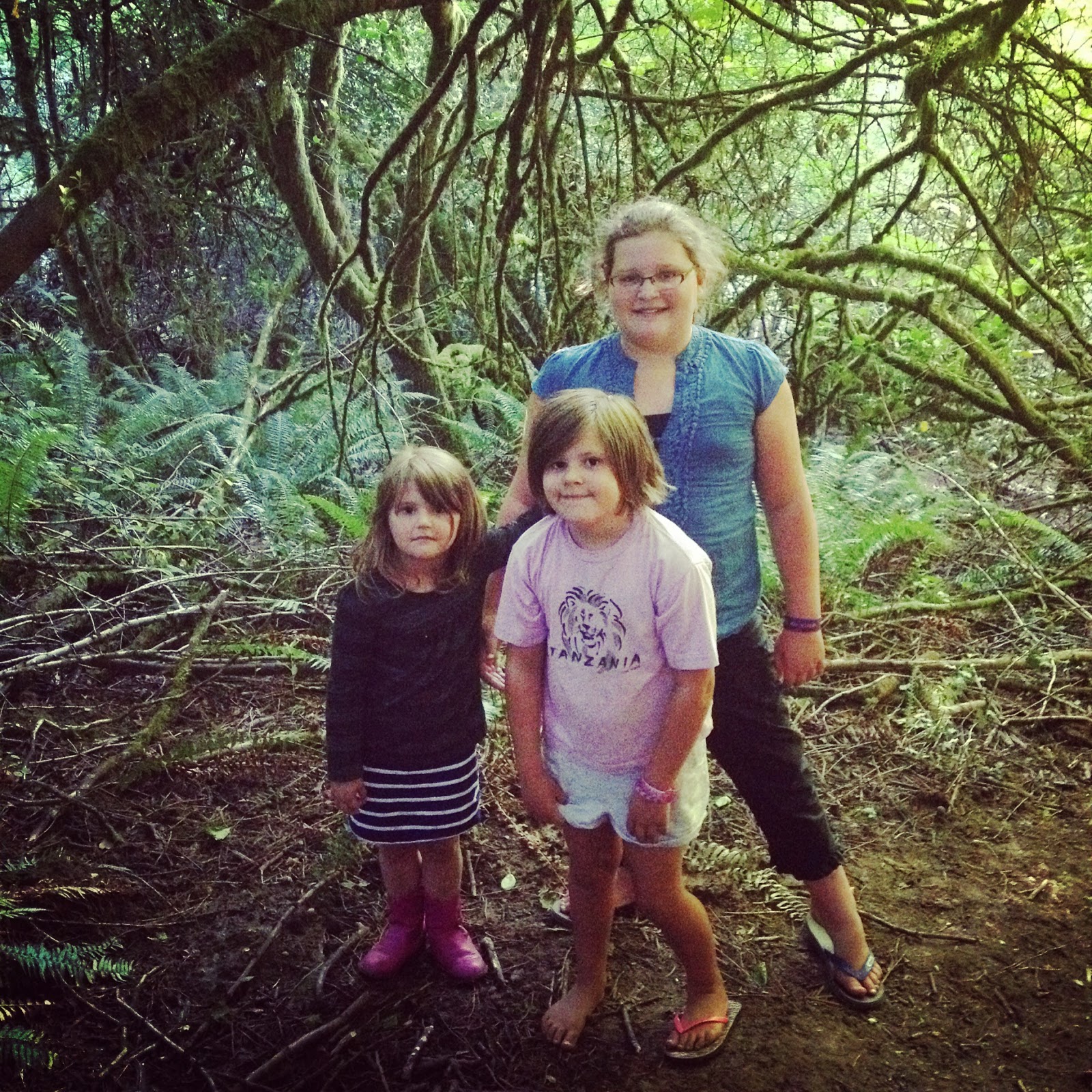 We set up the trusty tent trailer (getting better still) and had to laugh that although the kids started out sleeping inside the house, they ended up trickling back into the trailer. I guess all that togetherness really *does* make a difference.

We spent some fun days in Portland. We ate together and laughed a lot. We went to Powell's Bookstore and got some books for this  book-lovin' family. 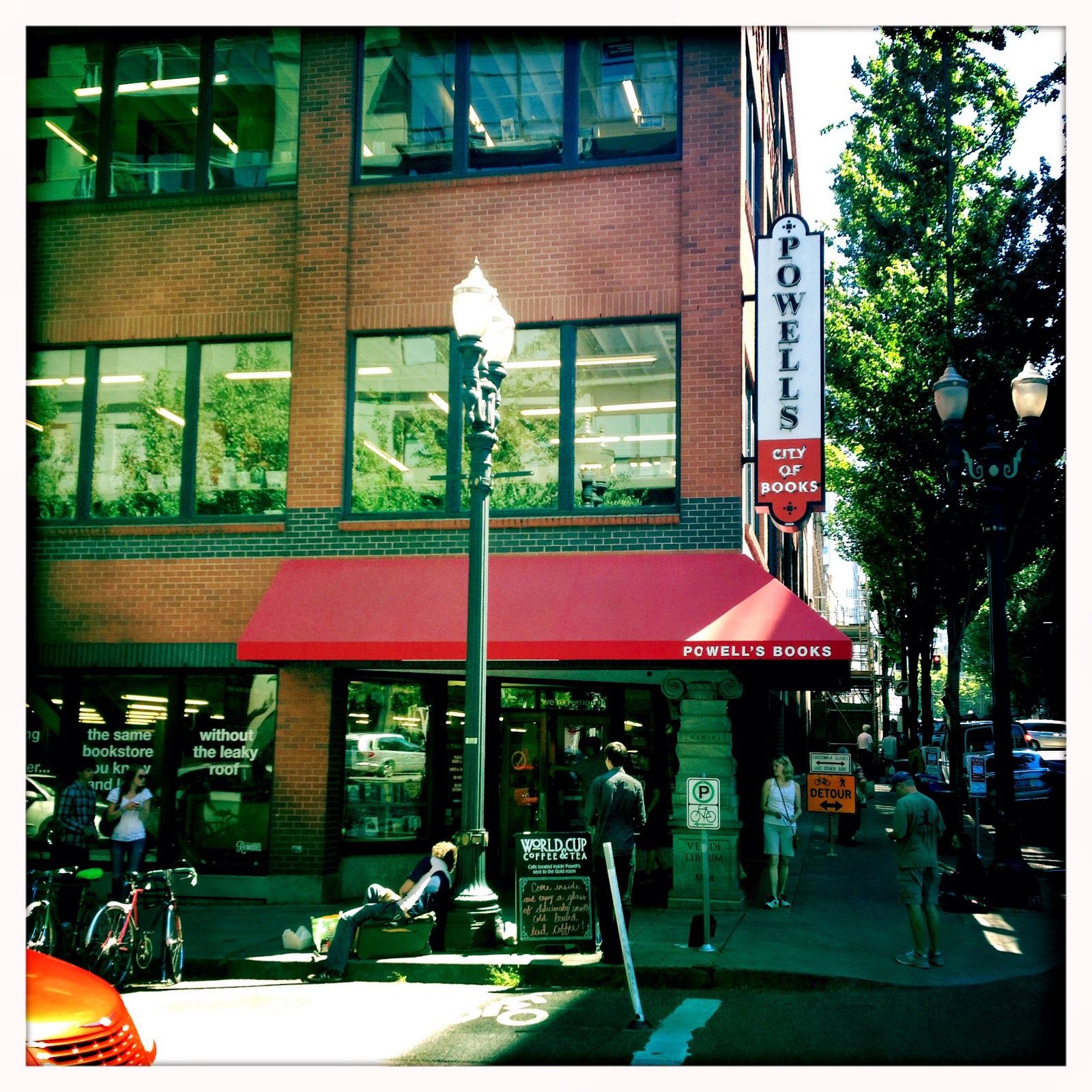 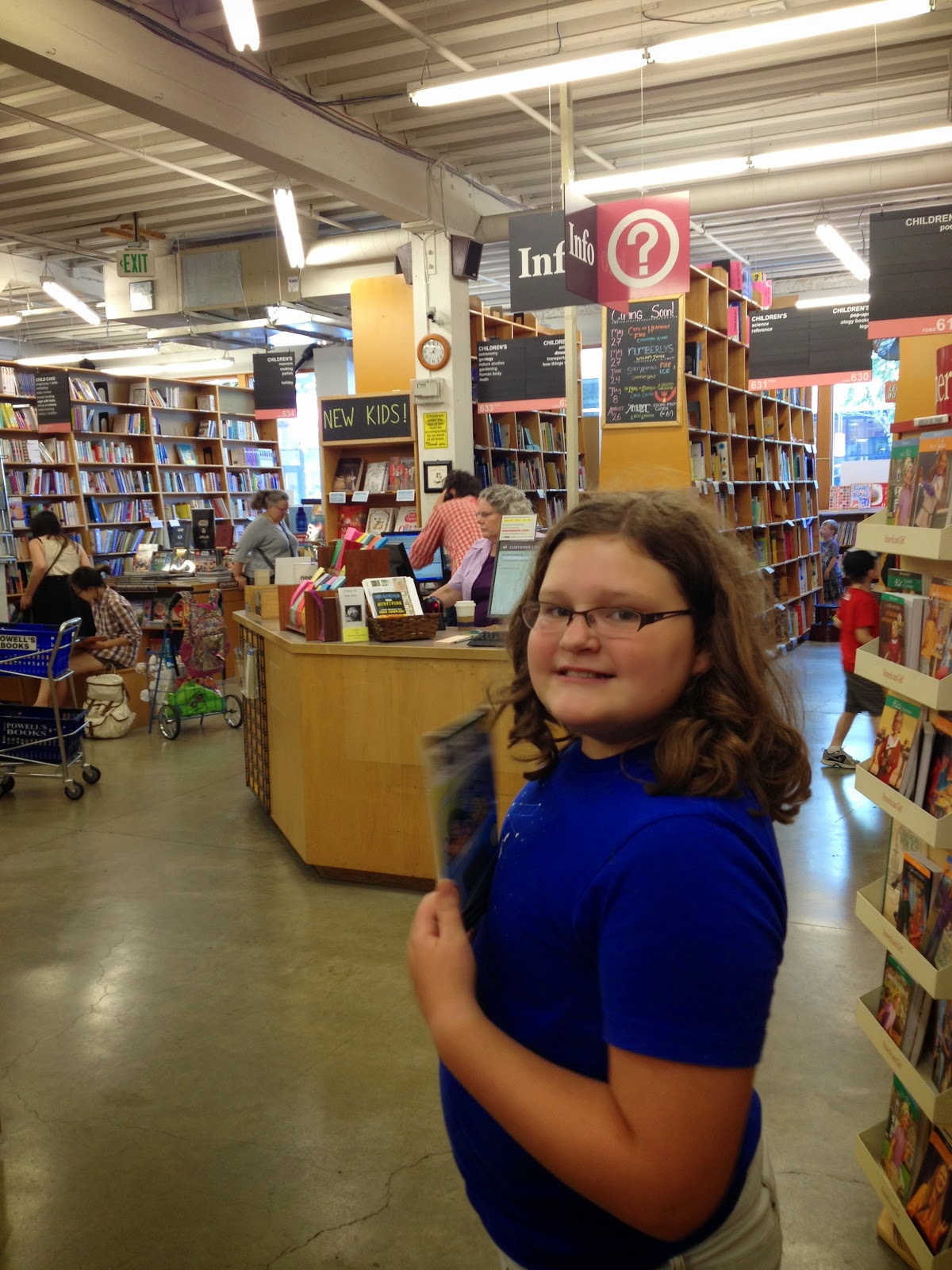 We went to the coolest science museum called The OMSI. 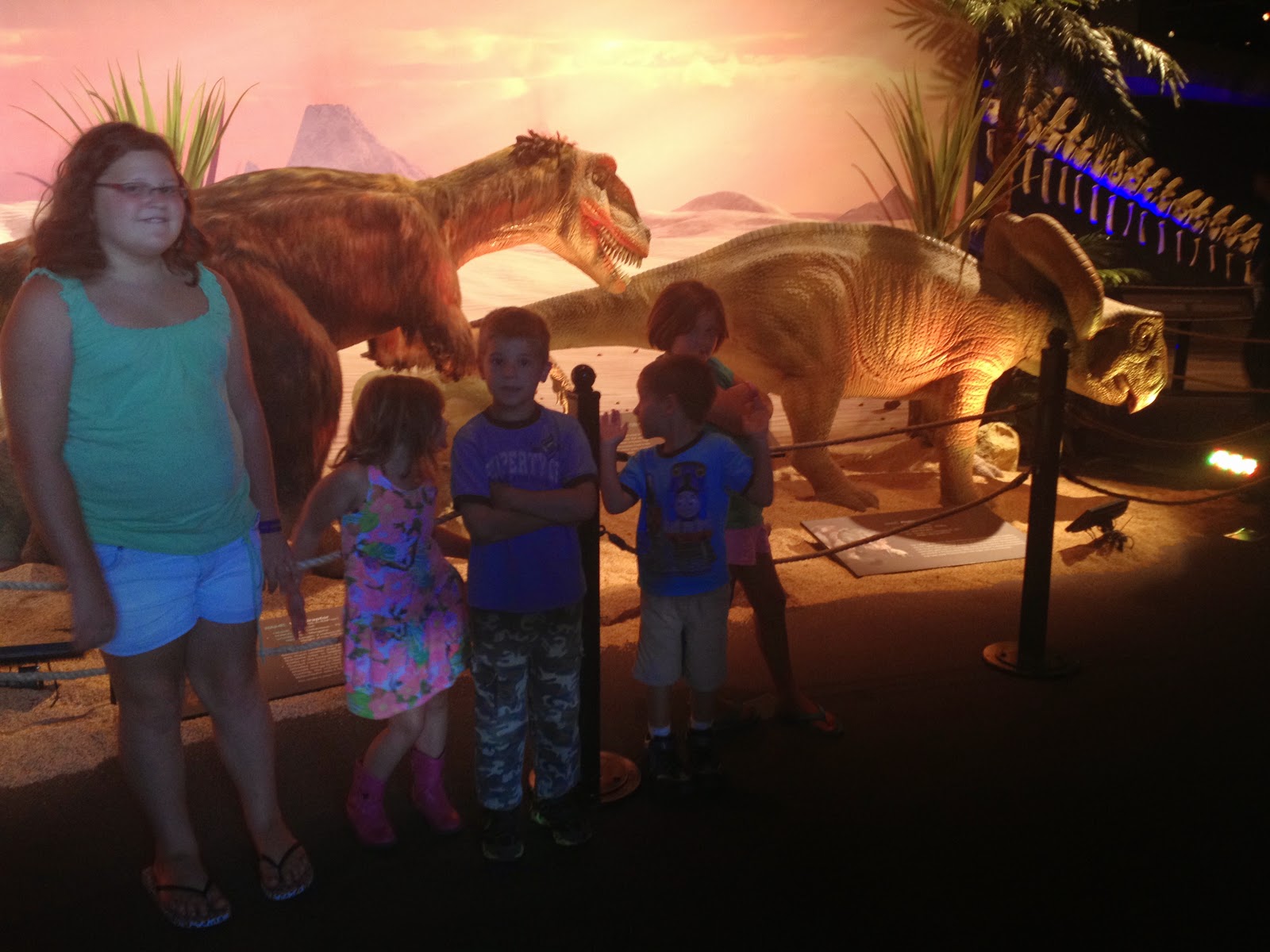 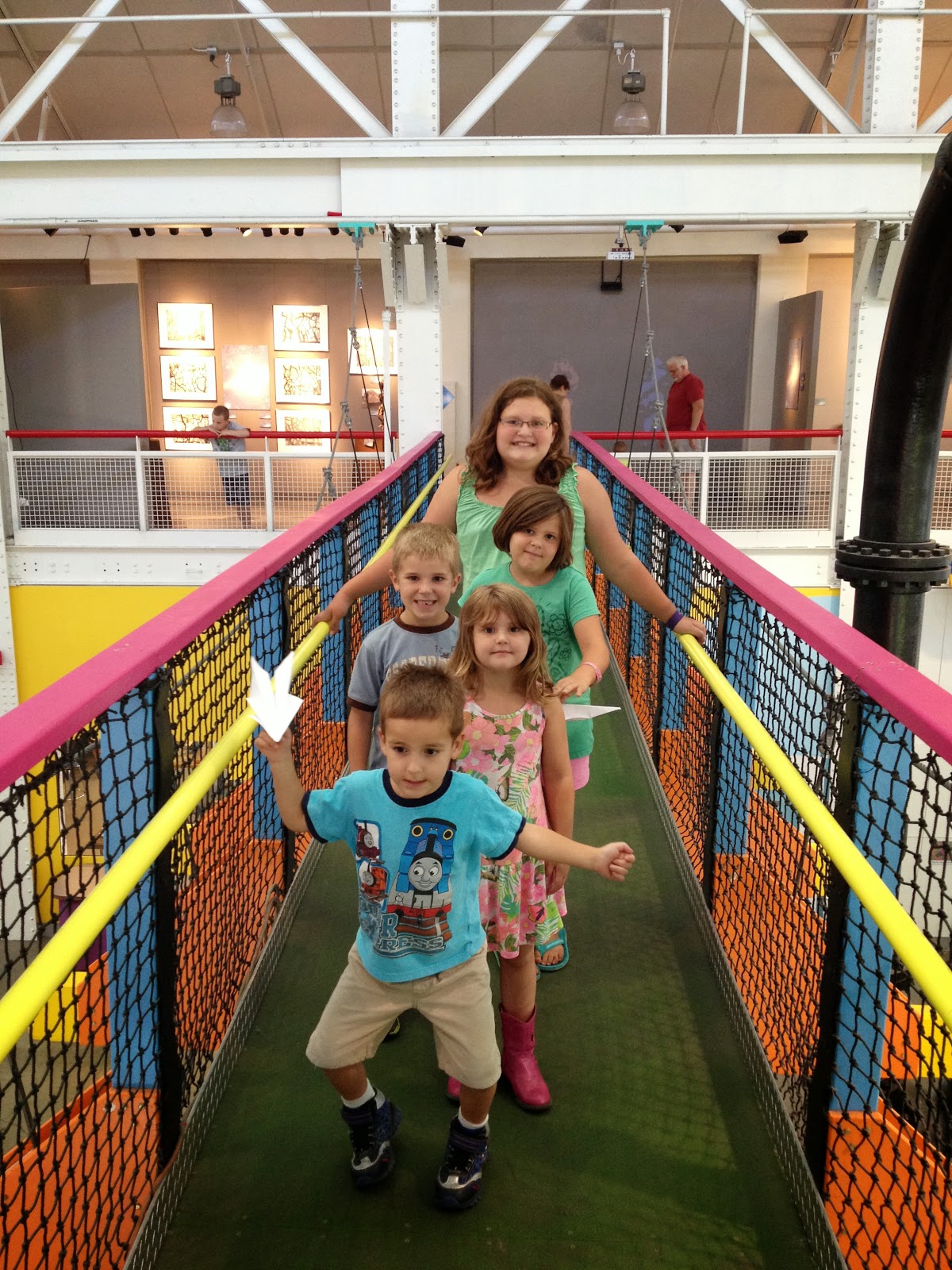 I even got to sneak off to IKEA with my sister-in-law and do some scouting out for items for the farmhouse.

I also got some good tips from her on how to refinish hardwood floors which has proven to be invaluable (more about that in future blog posts).

All too soon, our time in Portland came to an end and we drove back down to Cave Junction and dropped grandpa off at his house and then headed off to one of our favorite places, Ashland, OR. We had secured a great campsite outside of the city by the lake, set up the tent trailer and then headed to Lithia Park -- our super fun place.

After playing until the sun went down, we grabbed dinner and then headed "home" to the tent trailer where our neighbors had thoughtfully put up a huge screen and speakers and were watching "Pirates of the Carriberan". The kids clambored into their PJs and immediately laid down to watch the show...and eventually drifted off to sleep.

The next day after hitting up Rylie's old work place, Shop n' Kart, we loaded up on groceries and made the 9 hour trip down to our campsite in Yosemite. We pulled in late -- around 10 p.m. -- and go that tent trailer set up with lightning speed.

We spent four wonderful days in Yosemite Valley (another favorite place). We swam, we ate ice cream, we rode the shuttle bus, we played in the rain, and we drove up to Glacier Point. 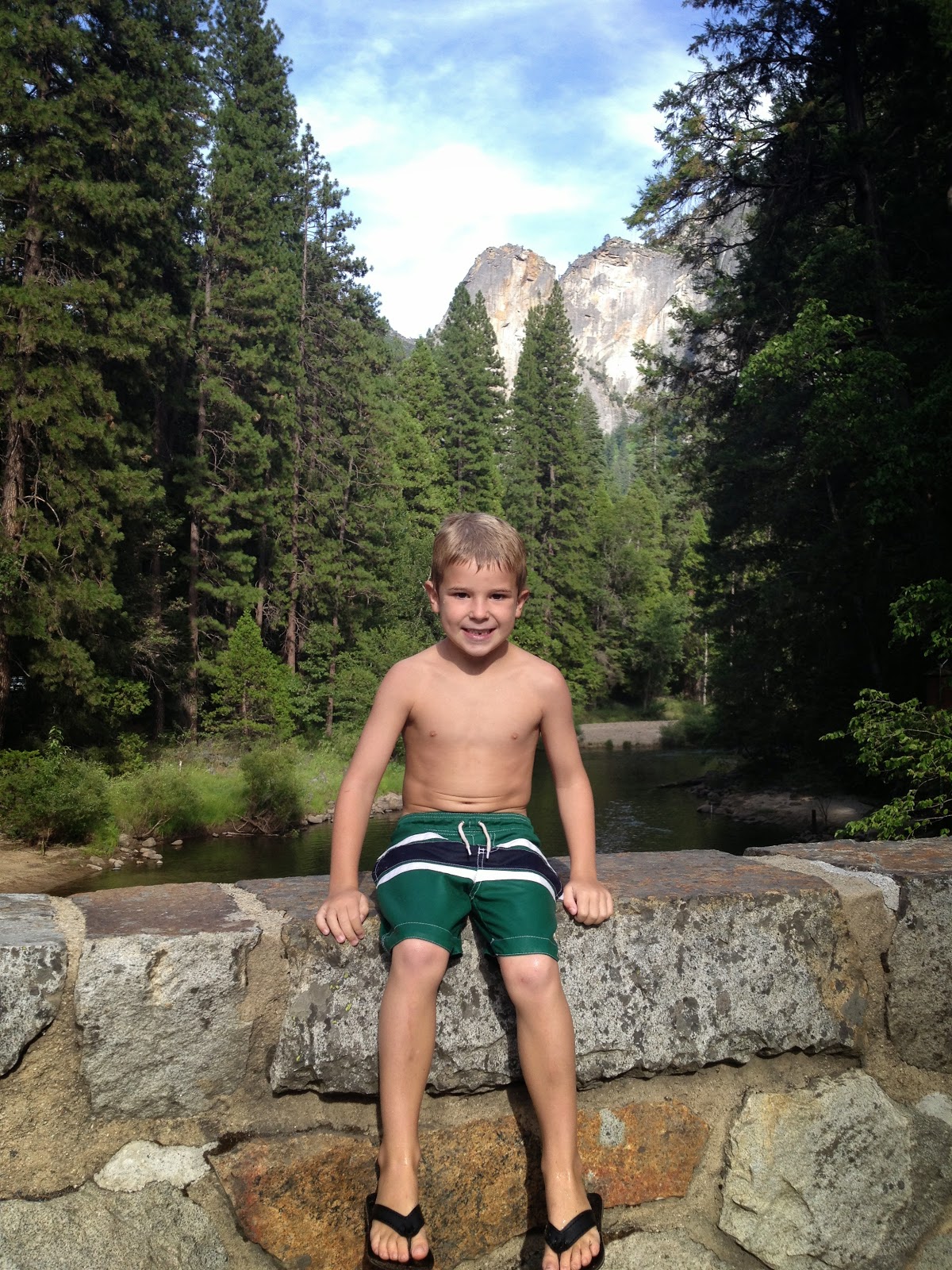 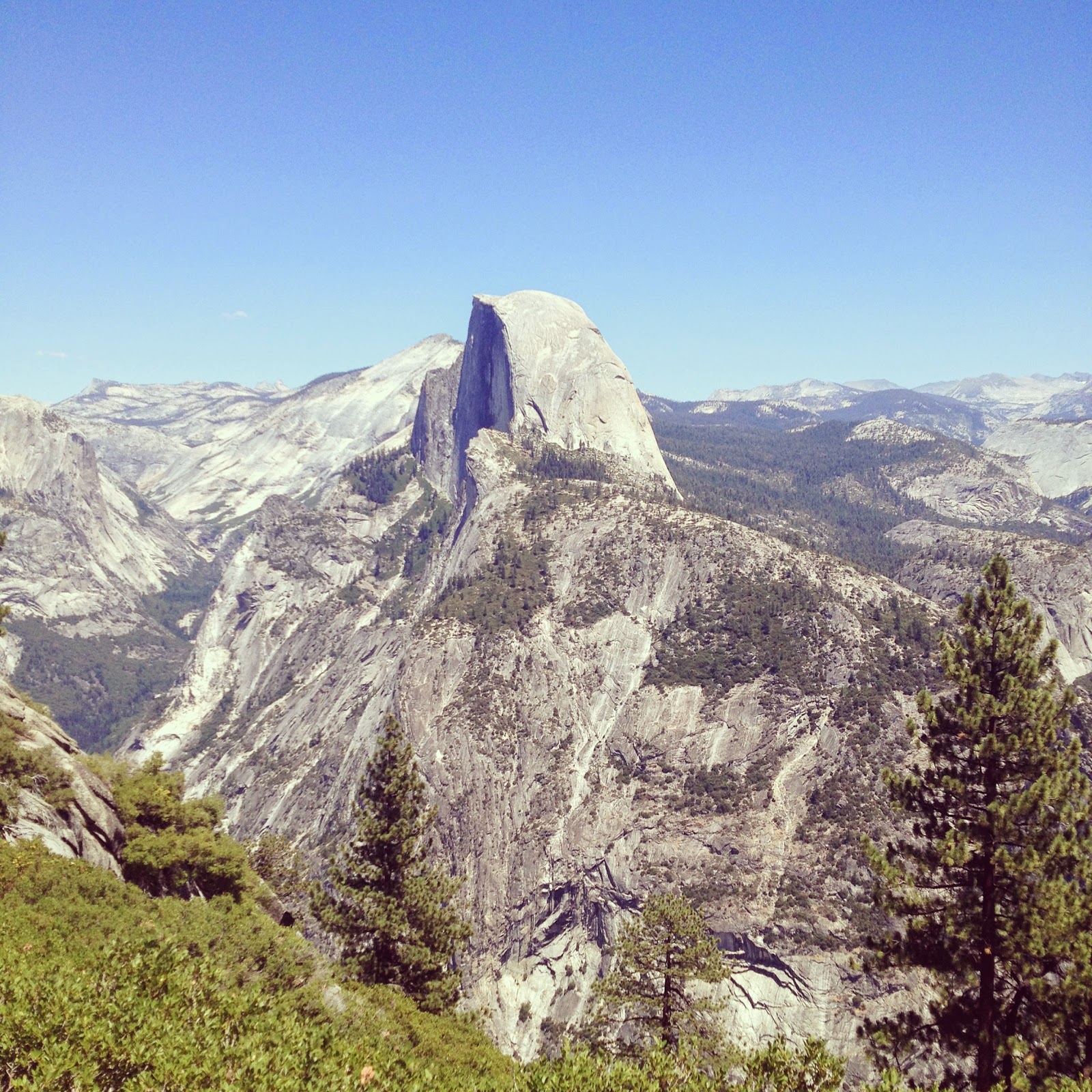 My kids made the trek up the Mist Trail to Vernal Falls like champs (they were literally running and jumping off rocks) and they even wanted to go further up to Nevada Falls. It was a serious hike with an elevation gain of 1900 feet, a swim in the top of the waterfall, and then a bonus summer rain shower on the descent. 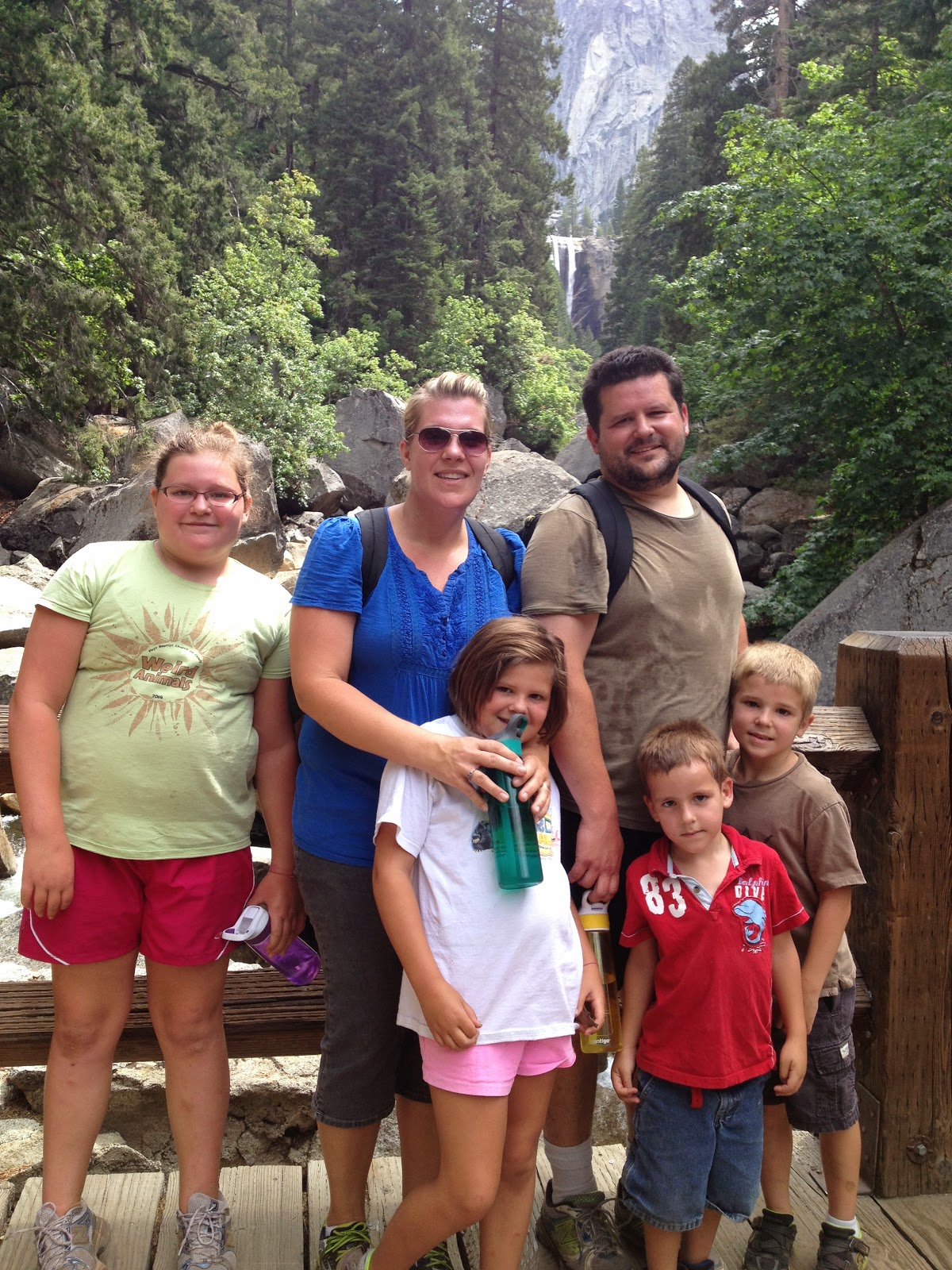 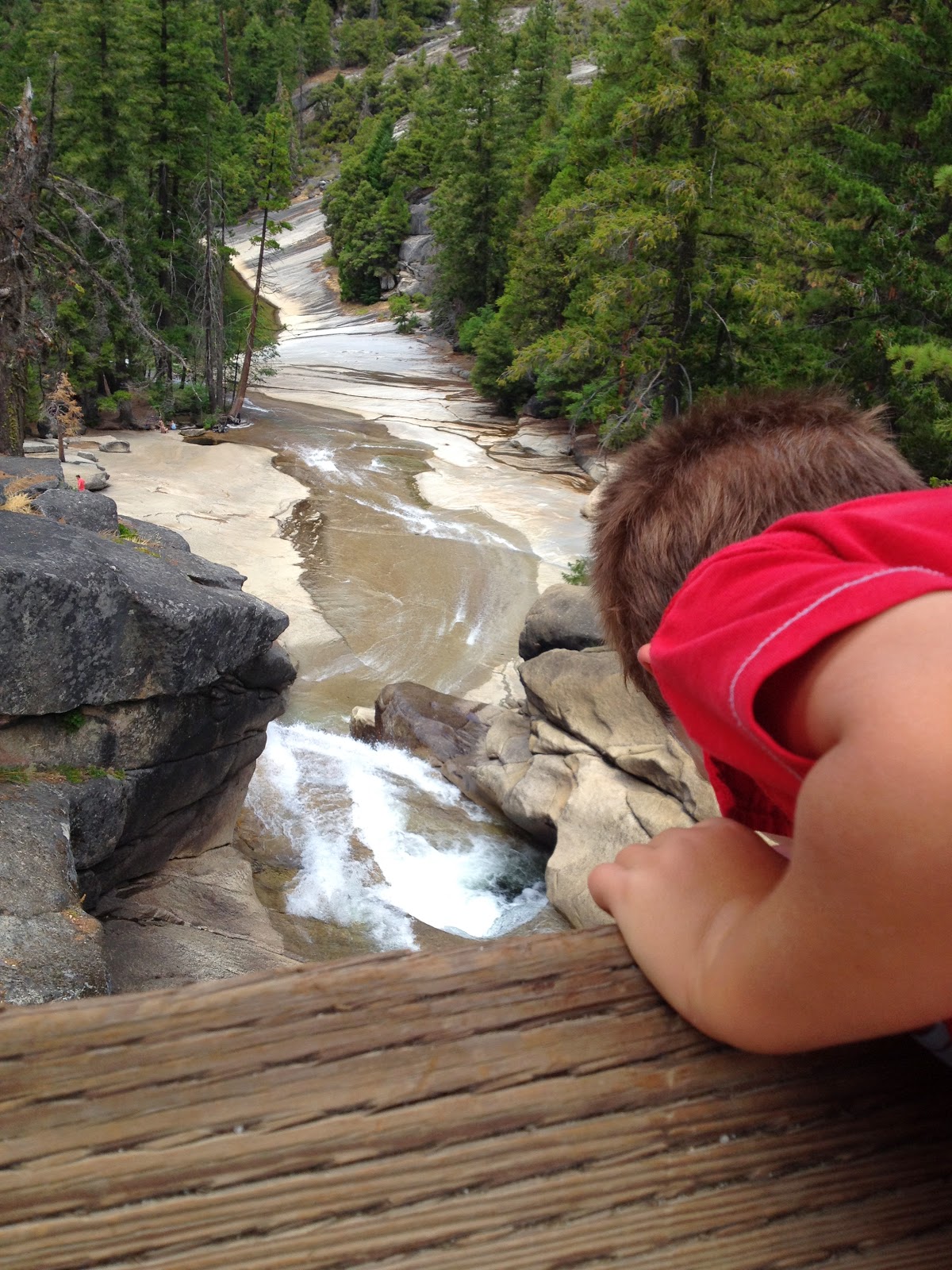 And then it was time to head home and after two weeks, and a lot of dirt under fingernails and in crannies, we were ready to sleep in real beds and have a long hot soak in the bath tub.

Again....after 9 and 13 hour driving days, 2.5 hours is a snap. We got home in what seemed like record time. We drug our tired, camp-fire smelling bodies inside and collapsed (after that long, hot bath of course).

And then...began the countdown for closing on our house. We signed our papers at Starbucks and I looked up and saw this... 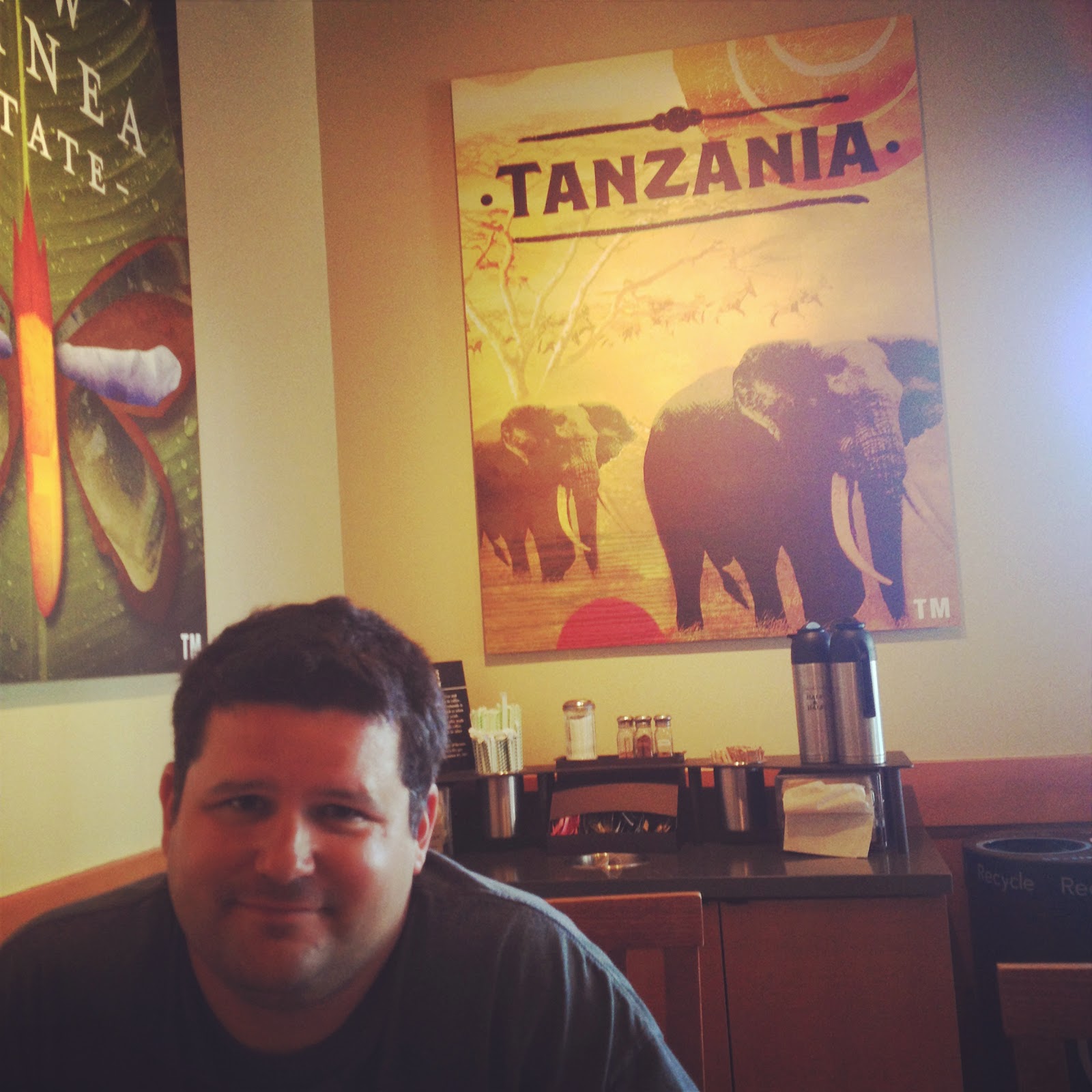 And after a few close calls and glitches, we got our keys Friday evening. 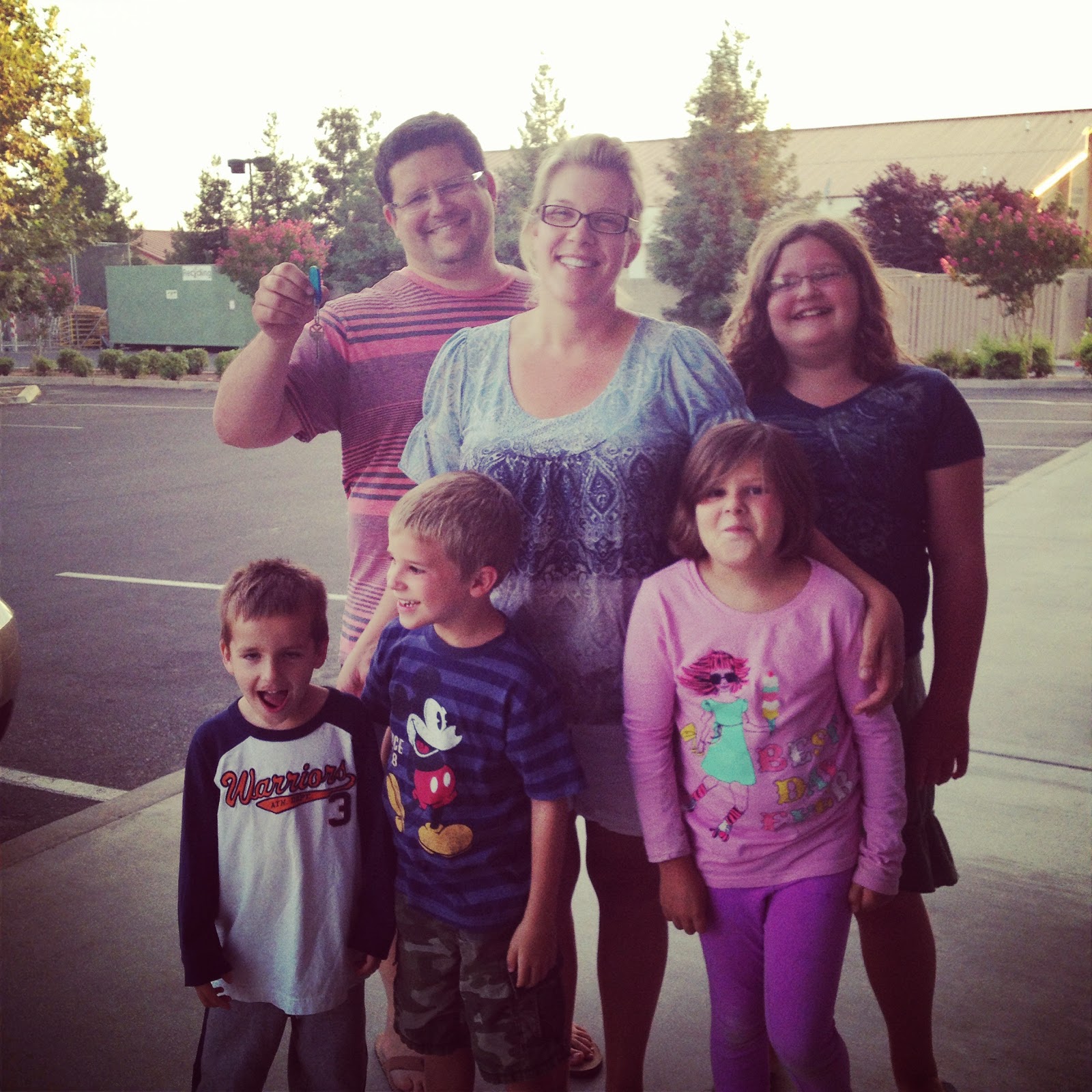 And then, the real fun began.

Stay tuned for more posts about owning a farmhouse and getting it ready to move in (yes, we are still at my parent's house -- bless them!)