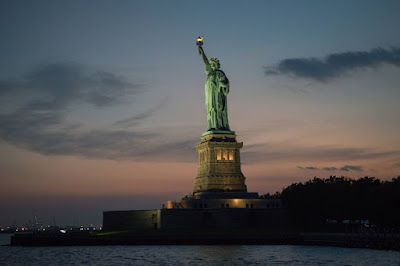 I have heard many people refer to you as the Land of Opportunity.

Today, I have an amazing opportunity to share with you. I wish I could say it's a once in a lifetime deal, but you've been down this road before.

Take a deep breath and a giant step back and look at the state of our Country. We are hanging on to our cultural integrity by the slimmest of threads. Lady Liberty's gown is showing some serious tatters as she tries to use her torch to light our way through this mess.

The opportunity is one that you've had before over the centuries.. However, time and again you have refused to acknowledge and change. So, as with most things of this nature, opportunity has once again presented herself.

And once again, you have the opportunity to make a different choice.

Are women who allege sexual assault worthy of your belief and trust?


No, don't frame it within the current political morass of the Kavanaugh appointment to the Supreme Court. That's just the current vehicle highlighting an ugly truth.

Somehow you have made it easier to side with perpetrators and proclaim their "innocence until proven guilty," while making it harder (and nearly impossible) for women to offer some expected measure of proof that will convince you the alleged assault in fact took place.

Some of us didn't actually see the face of our abuser. We didn't know his name. Yet somehow the way he smelled is forever recorded in our memory banks, as well as how the terror when he touched us electrified every synapse in our bodies.

And for those of us who knew exactly who violated us and how they did it, we still didn't tell. Because he was a family member or a trusted friend. He told us that no one would believe us. He told us that telling would hurt our mother or our father. He said that it was no big deal and not to be so uptight about it. He said they would call us a slut or a whore because we clearly wanted it.

And because some of us were so young, our still-forming and traumatized brains trying so hard to protect us, took that horrific memory, stashed it away in a dark closet and tried to wipe the slate clean.

But trauma doesn't work that way. It always finds its way out. And its rarely ever in the moment of our choosing. It's rarely clean and tidy and easily-processed. It's traumatic and messy and agonizing and shaming. There is profound and pulsating grief for the little girl we once were or woman who has been forced to give up a part of herself she never wanted to give.

See, the thing is that many of didn't keep the clothes we were wearing that day. We didn't set up a web cam facing our bed that evening. We didn't think we needed to constantly record our daily lives so we could capture physical and verbal abuse in the act.

Because we didn't invite the abuse. We didn't want it. Many of us never wanted to think about it or talk about it again for the rest of our lives. We didn't think we'd have to prove our story to be believed.

And the not being believed -- this is almost as bad as the abuse itself. And when you finally get up the nerve to share your most painful secret, are told you are believed but it is never referred to again and you are left on your own to work out the pain, trauma and heartache, this is the third type of betrayal.

If you are fortunate enough to have been trusted with someone's deepest and darkest secret, please do not dishonor that. Please do not squander that trust and use it to shame someone later. For God's sake, do not "out them" before they are ready to share their own story.

And for the love, have the self-awareness to not post memes or share posts that call women's integrity regarding sexual assault into question.

America, you are selling a prevailing and persistent narrative regarding women making false reports of sexual assault. In fact, estimates shows this happens in 2 to 8% of REPORTED rape cases.

Put another way, 92 to 98% of the time, women are telling the unvarnished truth about their assault and assailant.

This is an undeniably HIGH number of women who are telling the truth!

So why do you insist on focusing on those 2 to 8% of cases rather than weeping over the other 92 to 98% of women who are coming forward and telling their stories of torment, sorrow and profound loss?

Why are you not sitting and lamenting with these women? Why do you refuse to help them sort through the minefield of their trauma or leave them alone if they want to be left alone?

To be honest, I don't know why.

But I suspect it has to do with Patriarchy and Authoritarianism. Ah, the twin evils of our time and my own personal nemeses.

Many of us already understand that sexual assault is not just about sexual gratification. It's also about power.

Those of us in this super crappy club that none of asked to join can tell you while our abusers sexual urges were most definitely being gratified, they chose to do it upon us because they had the power-differential to do so.

When men as a collective group feel that women are subject to and beneath them, then they literally put women beneath them.

And Authoritarianism -- its evil twin -- is right there telling women to submit to their tormentors, to return to their abusers, to try harder to not make him mad, to cover up for heaven's sake...and worse allying fellow women who stand next to these "good men" and point the same finger.

That betrayal probably stings the most -- this complete and utter lack of empathy and compassion that some women fail to show their fellow sisters who have been ravaged and shattered.

But this is what happens when we are taught from elementary school to obey authority at all costs. That the uniform, title, badge, clerical collar or robes earns that person an automatic pass on all things suspect or alleged. That good little girls and boys respect and obey their elders.

This is equally toxic within the church. When people are trained and groomed to elevate title and position to a place that is not beholden to questioning or accusation. When it's taught that God requires you to acquiesce to your spiritual authority in all things and that the person who holds the power is God's "man or woman," then it's nearly impossible to speak out and to be heard.

Because how do you speak out against God?

And so, those who do speak out are vilified and condemned. They are shunned and turned out. And the oppressor and abuser goes on to the next victim.

My sisters and I are tired.

So many of us in this wretched club of survivors just want to live our lives. We've cried the tears. We've done the trauma counseling. We've tried to move on.

But America, you won't let us.

You keep accusing us of making stuff up, tempting "good men" with our womanly wiles, cooking up schemes to exact revenge or take someone down and dredging up the past instead of letting sleeping dogs lie.

We're expected to let "boys be boys," and understand that they need to blow off a little steam, sow some wild oats, and engage in sexual escapades.

We're accused of not letting these "boys" off the hook and indicting them for "indiscretions" they committed in their youth. As if they merely side-swiped a car without leaving a note. As if there is a statute of limitations on a ruined life and broken spirit.

So we're wringing our hands, crying fresh tears, relieving the memories, and considering the most painful and traumatizing part of it all.

These stories are ours alone. They are ours to tell if and when we choose to tell them.

But America, you are forcing us to tell them.

Because we cannot be silent any longer while another sister gets ripped to shreds in the media and on our Facebook friends' pages. We cannot eat or think or catch our breath as the stories of abuse being told bring back to mind our own. We are tormented by what we know in our gut about assault and abuse and rape and pain and ripping and bruising and slowly coming back together again.

And we believe....we so desperately hope that if you knew our stories...if you knew MY story, you would stop making blanket statements about sexual assault allegations and victims. You would sit down and shut your mouth about things that (thank God) you know nothing about. You would listen and would hear and you would feel and you would mourn.

And then you would get up off your butt and do something about this jacked up rape culture in which we live.

America, I believe in you. I still believe that you can change your ways and be that shining torch on a hill.