The Practice of Love

I was so excited to walk by the Target Dollar Spot the other day and spy these mailboxes. I know that I have bought them before. Where they went is anyone's guess.

But this year...this year of "Being Resolute" and of my "Fab4D" birthday, I decided that I wanted to do something I'd been mulling over a lot.

Being more purposefully in loving on my kids and having them love on each other throughout our homeschool day.

However, the store I was at only had three colors (apparently there is a robin egg blue out there somewhere), so I opted to get one red, one pink and two white ones for my kids.

I brought them home and set them on the counter and then forgot about them.

However, the kids did not.

What are these?
What are we going to do with them?
Which one is mine?

That last one was a good question because I had thrown a confusing wrench in our home and homeschool organizing system by bringing home the two white ones.

You see...each of our children has his/her own color. This extends to cups (cuts down on the amount that they use/I wash each day), pencils and more.

So you can imagine which two were confused.

The eldest would have been fine with the white. She was planning on decorating it anyway. She had already made her own cut-out hearts and put them in the mailboxes this morning before I even "introduced" the concept.

However, my eldest son loves blue and loves our system (and systems in general) and he very sweetly begged me for blue.

Upon perusal of our paint can inventory (yes, we have a collection from Pinewood Derbys of year's gone by), I saw that we were out of blue. But we had plenty of purple!

A short trip to Walmart later, and I was in the garage passively-huffing paint fumes.

And a few hours (and coats of paint later), eldest son was happy...and actually eldest daughter was happy too. 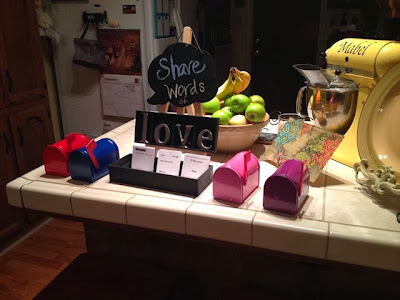 I did some poking around on the internet and found some printable message slips that I printed out and cut. I can't wait to see how the kids use them and their own creativity as we have led up to Valentine's Day and marched beyond.

Because love should be practiced more than just special day, right?