The God Who Loves Lexi

I have been reading an amazing book called, The Circle Maker, by Mark Batterson. And it's prompted me to press in harder and longer with my prayers -- to believe that God is for me and that when I pray according to His will, that He will answer me. It may not be today, or tomorrow. It may be 10 or 20 or 30 years from now. But He will answer.

Beyond that, I have also been asking God to speak to me, and more specifically, I have been praying that He would help me to listen for his voice.

So often I'm guilty of hurling petitions and thanks in God's direction, but I so infrequently stop and take the time to allow for the space and quiet for Him to reply.

When is the last time you sat in utter stillness after praying and let God speak?

If you're like me, it's been far too long.

And God has been speaking. It's incredible.

About a week ago, I dropped the kids off at the respective classes at church and then got ready to leave the church campus like I'd planned. Because I attend a weekly Bible study, am part of a book club, and mentor someone twice a month during the Wednesday night weekly church service, I do not attend the adult class.

And so, I was walking through the church foyer on the way out to my van and my laptop that I had brought with me so that I could attempt to write at a nearby Starbucks, when I clearly heard the word, "Stay" in my spirit...brain...heart. I'm not sure I can pinpoint where I heard it, but I heard it.

I mentally sort of shook it off and kept walking and chalked it up to my continued pastor's daughter guilt of not staying for a church service (cuz, yes, I feel that sometimes even though I am "churched up" throughout the week in other ways). I kept on walking through the parking lot, got to my van and got in and put the key in the ignition and then I heard it again....."Stay."

By now, I had the feeling that I wasn't just hearing things or acting out of guilt. I still somewhat doubted that it was the voice of God, but as soon as I thought about the doubt, I remembered that part of discerning and hearing God speak is being faithful to do what He says. So, I figured I would take Him at His word....literally.

So, I removed the key, got out of my van and went back inside to be a part of an amazing worship service in progress. After, one of the pastors spoke for a bit and then played a portion of a DVD study on The Circle Maker. Now, I didn't even KNOW that they had a DVD series, and can you guess what Mark Batterson talked about?

Praying to hear the voice of God!

I was so excited, I texted my friend (whoops...caught me texting in church), who was literally flat on her back dealing with acute sciatica. Two days prior, I had been doing dishes and thinking about her when I felt that voice again telling me to give her my Circle Maker book. (Mind you...this was my second copy. The first I had "somehow" left at a friend's house on a family vacation and I'm still waiting to hear how God uses that book in my dear friends' life.) Anyhow, back to my second copy. I knew that I was supposed to give it to her and tell her that God was giving her a choice to either spend her time on her back and in pain in prayer and hope or give over to despair and depression.

She chose prayer and hope and I had spent some time reading the book to her. She had started praying circles around things/people in her life, and was seeing some amazing things. I had texted her to tell her what God was doing in my life right then and she asked if she could somehow see the DVD as well.

After an amazing time of prayer, I approached the pastor and asked him if it might be possible to borrow the DVD after the church was done with it. He said, "why...would you know that tonight is the last night of the series and I actually looked at it this afternoon and thought, 'what am I going to do with this this DVD now?'"

"I'll tell you what you can do with it," I told him, and then proceeded to explain about my dear friend. He happily went upstairs to get the companion guide and gave me both, which I was able to send home with my friend's husband that night.

Only heaven knows. Is God big enough that He could get the DVD series to my friend who desperately needs it right now?

But I think that He wanted me to be a part of this continuing story. It built my faith. It built my pastor's faith, and of course, it built my friend (and her husband's) faith.

And it continued bearing fruit.

Two nights ago as we were driving home, my sister sent a copy of a text she had received from her son who was on a missions trip with the youth group about how God had spoken to him about his participation on the trip and that he wanted my nephew to continue going on trips and helping people.

My ten-year-old piped up from the back of the van and said, "Mom...how come their family is always hearing from God, and God doesn't speak to me?" She got emotional and said she didn't understand how come he wouldn't talk to her.

My husband explained the different ways we can "hear" the voice of God and how it's important to ask Him to speak to us and then be ready to listen when He does speak.

That was my cue.

I was able to share my recent story with my beautiful daughter and assure her that God does want to speak to us and He will. I encouraged her to pray and ask Him to share His heart with her and then to be bold enough to listen and act.

I'm confident that she will soon be sharing a story of God speaking to her little heart.

Well, during this week of God doing amazing things, the story of Lexi is another amazing one.

My mom gave me a bag of items that was donated to the church she works for that she thought my kids might enjoy. There was a series of chapter books and then a Veggie Tales CD. What my mom didn't realize is that the CD was personalized with the name, Lexi, on it. This means that all the songs are sung to and have the name Lexi in them. We actually have one that is personalized for one of my kiddos, and therefore I know that while it would be fun to listen to the songs, it wouldn't be as much fun when the name they are singing is not your own. 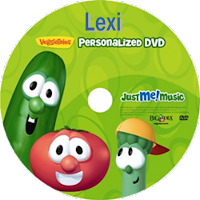 I thought about tossing it, then donating it again, or even posting it on Facebook for someone to claim.

And then I went to pick up my kids from VBS. As I signed out daughter #2, I happened to glance over at a little girl in her group and there on her shirt, I saw the name, Lexi.

I freaked out inside.

First of all, 90% of the kids do not have their names written on their VBS shirts, but this little girl did.

Second, this little Lexi was in my daughter's group...one of probably 30 groups with a total of probably at least 200 kids attending total. And I think that's being conservative.

I smiled and said, "Lexi...God has something that He gave me to give to you. It's a Veggie Tales CD with your name on it and in the songs. Would you like it?"

She shook her head shyly and that was that. I put the personalized CD in her little hands today and she smiled at me.

He knows Lexi by name.

Just as He knows mine, and He knows yours.

And He'll go to crazy lengths to make sure we know it.