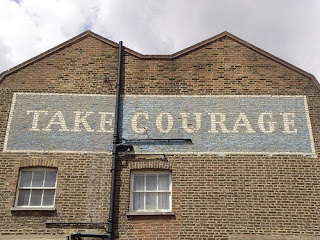 It's Tuesday, so that means that I was once again thrust in a cauldron of emotion watching our current Beth Moore study on Esther (Esther: It's Tough Being a Woman). Today was about bravery.

It's pretty much to the point where my spirit is so raw and tender that when she starts to speak on the DVD, tears start welling. I'm utterly amazed that this study would cut through the marrow of my being and pierce straight into my very heart. (Although I really shouldn't be...) Coupled with a new worship CD

And it was no exception that today's study was so significantly deep for me. I find myself alternating between thinking, "this is so good. It's exactly what I needed to hear!" to "Oh....how I wish ________ could watch this it...it's so good!"  How wonderful it is when God uses written words, spoken thoughts, music and his own Word and voice to confirm to us what He wants us to know -- and not just know...to take it inside deep within us and plant it so that we never lose grasp of it.

Today we learned about facing our fear and how even as Christians we can live in a constant state of fearing for "what may be." Any mother knows the terror that can race through your veins when you hear your child scream that scream that raises the hair on the back on your neck. We know the fragility of life and we don't need to watch Oprah specials or see Nightline to know that bad things happen. We're just terrified they might actually happen to us or the ones we love the most.

The study today taught me that facing that which we fear most requires courage and not denial. Denying what is, does not make us brave; it just makes us deluded. Statistics say that a high percentage of what we fear happening will never actually happen. But that doesn't stop us from letting our minds run wild with all the things that "could happen."

But, what if there was a better way? What if we could live a life without fear?

As a mother, I would not hesitate to say that mine would be, "And if one of my children died, then I would fall to the floor in grief and wail until all the liquid in my body poured into the carpet from my swollen eyes. If that happened, I wouldn't ever want to get up, I would want to lay there forever and ask God why, why, why, why??? I might get angry at God. I might shut myself down and off and crawl into a ball in my bed and stay there for months or years.

But I'd like to believe that one fateful and faithful day, I would come to the end of my own despair and grief and choose to say as Job did, "Though He may slay me, yet I will praise Him."

I could only hope.

Because really, at the end of our depleted spirits, we're left with God and Him alone and the realization that even though everything we know and love might be stripped away from us, we still have Him.

And even in nothing, and especially through that nothing, He can be our everything.

As we were reading in Esther 3:7, we learned about that Haman cast lots to decide which day the Jews would be massacred according to his wicked plan to annihilate God's chosen people. The thing that struck me most was that there was a period of 11 months from the day the lots were thrown from the date that they chose.

If we truly belive that God is control of everything and He's in control of time and how timing unfolds in the events of our lives, this becomes a puzzlement. Why on earth would God allow for so much time for the Jews to live in a state of mourning and agony as they considered their fate. Could God have caused the lots to fall at 3 months? 6 months? 1 month?

What could He possibly gain from almost a full year of his people looking at their Year-At-A-Glance calendars and seeing that month 11 moons away circle in red?

He gained their hearts. He gained their trust. After all, when you've had 11 months to try everything you can to change your fate and nothing has worked, I think you are pretty much resigned down to one simple truth.

God is in control.

You either believe it or you don't. And sometimes you don't know what you believe until you have the opportunity to find out -- as terrible and horrific as the circumstance it may sometimes come wrapped in may be.

Do you know what the most common command in the Bible is?

And so often when it is uttered by the Almighty, you can usually find the words, "Take Courage" nearby.

As Ambrose Redmoon so eloquently said, "Courage is not the absence of fear, but rather the judgment that something else is more important than fear."

It's yours to take and His to give.